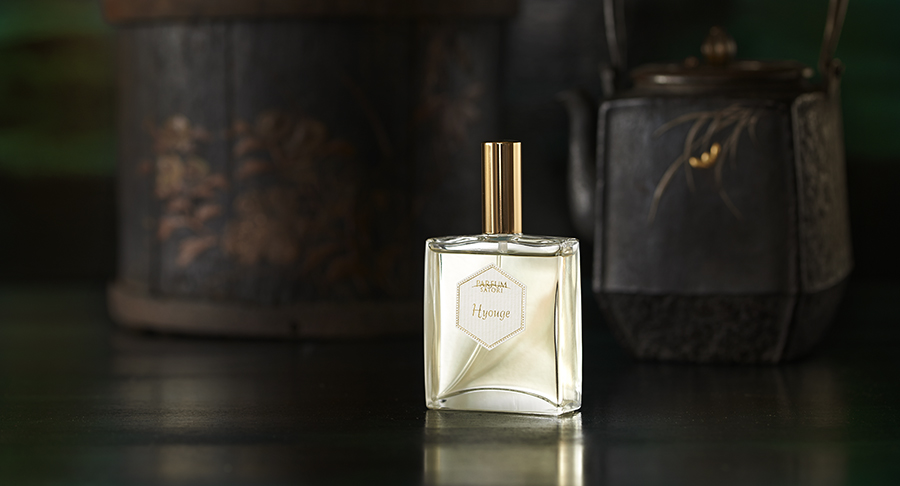 People often ask me what comes first - the name or a fragrance. It's really case-by-case.

Sometimes I decide upon a theme and the fragrance is formulated as I work towards it. On other occasions, I struggle to find an appropriate name once the perfume is complete. My working name for this particular fragrance was Matcha (a powdered green tea used in Japanese tea ceremonies), and its official name came later. Matcha struck me as being somewhat unimaginative and after jotting down and erasing several ideas, it was the name "Furuta Oribe" that came to me.

Furuta Oribe was one of the major disciples of the celebrated tea master Rikyū in the 16th century. Although he conducted tea ceremonies in the manner of his master, he was also known for loyally keeping the spirit of his master's teaching,  "Always try something different." Oribe was bold and liberated in character and introduced a new sensibility of beauty into the world of tea, bringing about hugely popular gardening methods, architecture and porcelain that were referred to as

"in the taste of Oribe." The green and black designs of tea sets over 400-years-old are novel and unique even today. 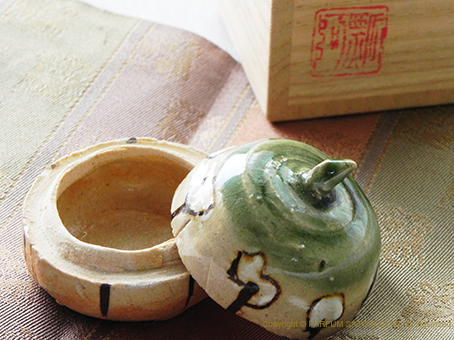 I can't exactly remember when I first heard the name Oribe, but I know it was when my mother was talking to me about her tea utensils. I officially entered the "Way of Tea" (Chadō/Sadō) when I was twelve-years old. As I came into contact with the tea ceremony - either with my master or with my mother - stories regarding Furuta Oribe found a place within me, and led to the naming of a fragrance several decades later. Therefore, I must also credit my mother.

I started to read more about Furuta Oribe after naming the perfume. The famed author Ryōtarō Shiba praises him, "In the world of formative art, he was probably the first person with a sensibility for the avant-garde."

Some people have asked me why I named this fragrance 'Hyouge(formerly Oribe)' instead of Rikyū. Although a flash of inspiration isn't reliant on logic, I could put it down to the fact that Oribe isn't as well known as Rikyū. I wanted to "try something different."

With my fragrance "Satori," I not only strived to recreate the aroma of agar wood, I also wanted to manifest the appearance of an elegant woman in the purity of a Japanese-style room. In the same way, the fragrance of Hyouge(formerly Oribe) goes beyond embodying the refreshing aroma of Japanese tea, it represents the spiritually of practitioners of the Japanese tea ceremony.

The slight bitterness comes from cis-Jasmin, which is a single aroma used in Jasmine Note to create a bitterness and astringency.

For flavor, I included Violet leaf.abs. Although Violet leaf is said to resemble cucumber, I think its aroma is closer to that of dry ingredients such as kelp extract.

A refreshing green aroma can be a little one-dimensional, so I added body with floral elements. 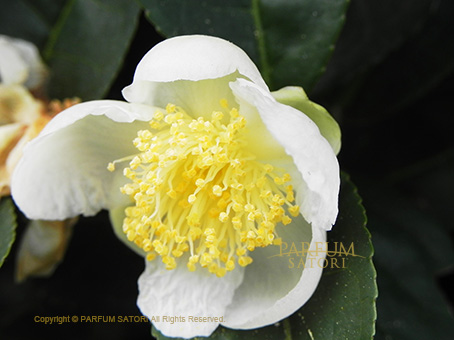 The tea tree, the Sasanqua and camellia japonica all belong to the camellia family. The Sasanqua blossoms in late autumn, the camellia in spring and tea flowers in December. Tea flowers are charming, like small white camellia blooms and their aroma is delightful. The fragrance resembles that of Sasanqua and also Hedion. Hedion is an essence that contains elements of Jasmine. This is why Tea Note and Jasmine are extremely compatible.

I added Jasmin abs. to boost the floral volume.

I included Iris butter and other natural essences to recreate the foamy and powdery sensation of making a light tea. I was aiming for something more complex than a plain green-type aroma. 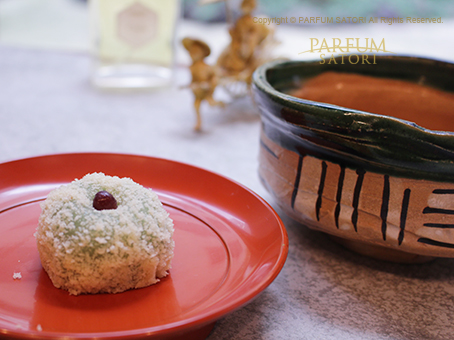 I observe a ritual of drinking Matcha every morning at home. Preparing Matcha for myself when I wake up makes me alert and ready for the day. Enjoying the beginning of the day like this is akin to an appreciation of the seasons.

In the world of tea, there is a November rite called "switching to a winter furnace" and utensils named after 'Hyouge(formerly Oribe)' are traditionally utilized at this time. I hope that this Matcha fragrance will bring you enjoyment in times of reflection.

【Image】16th century tea master Oribe FURUTA launched a fearless and liberated sense of beauty into the world of the tea ceremony. His Hyouge pottery – with its characteristic dark green and black designs – appears modern, even by today’s standards.The pottery has been referred to as Hyouge-mono (humor pottery) ever since its first appearance and is synonymous with its creator Oribe. 【Fragrance】The whisked, delightfully bitter properties of Matcha green tea are characteristic of this fragrance and a powdery sweetness lingers, testament to the fact that there is more to Japanese tea than light and refreshing scents.Type GreenTop notes : green leaves, clarysageMiddle notes : jasmin, violet, patchouliLast notes : woody, iris (nioi-ayame)Based on her interpretation of delicacy of Japanese culture, Satori OSAWA, a Japanese independent perfumer, freely explore a variety of inspiration. In this collection, each has a unique personality, the luxurious formula uses carefully chosen selective fragrance materials.