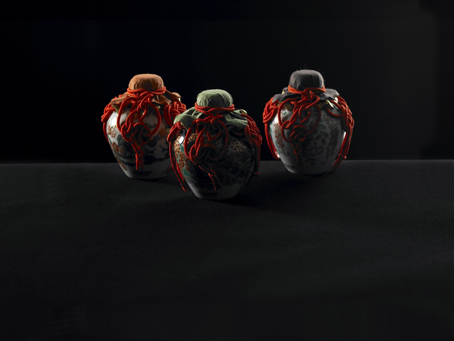 The World of a Japanese Perfumer: Part 1, an Interview with Satori Osawa

Marlen Harrison: Osawa-san, although Japan does not have a long history with personal perfumery the way some European cultures do, Japan does have a strong appreciation for aroma associated with Buddhism and Shintoism, for example, and of course there is 香道 or "kodo" (warming fragrant wood), "the way of scent".

*Osawa Satori: Yes, That's right. The origin of perfume is in Europe, and it is the history of the "liquid scent." On the other hand, in terms of Japan, we can discuss the history of incense which provides scent from a solid rather than a liquid and scents the surrounding space rather than the skin. The history of incense in Japan began with Buddhism in the 6th century. It was later refined in the 10th century by the aristocratic culture, and again in the samurai era in the 15th century.

And we Japanese didn't just scent spaces. For example, in the Heian era there was a silk dyed in clove and cinnamon called 香染 or "Kosome" that was used in luxurious garments for the nobility. It created not only a beautiful color, but the fabric emitted a fragrance; when the kosome kimono was warmed by body heat, its fragrance was emitted according to movement.

In the "Tale of Genji" there is a scene of 薫衣香 or "Kunoeko" (scented garment incense) where burning incense is used to scent kimono. Many of the characters in the novel are enhanced and identified by their scents. In Kodo, the aroma of incense burning or wood warming is expressed as "hearing" instead of "smelling". We not only capture the aromatic molecule physically in the nose, but also hear in our minds a story from the aroma of fragrant wood, the sentimental feelings.

In the 18th century, when the merchant class had more power, the cultures of aroma continued to spread to the common people. From emperors, nobles, samurai, and then to the merchant class, the fragrance culture spread from top to bottom, and it seems there has been a similar history with Western perfume.

Even now in Japan, many households have a Buddhist altar where incense is burnt every morning and night. We Japanese have been accustomed to these aromas since childhood. And the fragrance culture of Japan is not only that of fragrant woods. Every season has its own unique aromas, from the sea to the mountains. In the process of development from children to adults, smell is tied closely to life.

In these ways, the Japanese history of fragrance is different from the European tradition of putting "perfume" directly on skin.

Marlen Harrison: Is there such a thing as a Japanese style of perfumery? Please tell us your thoughts.

Osawa Satori: When one thinks of a Japanese scent, it is likely that incense comes to mind. In fact, light, simple, fragrances with flowers and a sense of the season have been favored. Among them, citrus notes is one of the fragrance notes that are particularly preferred. Japanese citrus is rich and can be distinghuished from citrus of other cultures. For example, Japanese citrus includes yuzu (pictured below), kabosu, and sudachi; there are very fine differences in their aromas.

Many of my customers in Japan, rather than wanting a scent to appeal to other people, want their own personal scent. When it comes to customers from abroad, they don't merely want a souvenir of Japan, they want to be able to use and enjoy their scents in daily lfe.

Marlen Harrison: What was your experience growing up in Japan in terms of awareness of modern personal perfumery? How was this different from Japanese cultures of aroma?

Osawa Satori: In the West, perfume was used on a day to day basis and was familiar. But in Japan we this wasn't customary. During my childhood, perfume was something very expensive (and the Japanese economy was not what it is today). I think many people viewed it as a rare souvenir from travels overseas, perhaps only used for special occasions. Moreover, there was a time when use of Western perfumes was seen as showy.

Nowadays, with fragrance being affordable, young people also feel free to buy and use fragrance. It has also become more common for men to use fragrance. But, many people still are unsure when or how to choose or use fragrances; we often look to rankings of fragrances for recommendations or choose well-known brands.

In Japan, many people do not use perfume although they do enjoy aroma. We also enjoy the essential oils used in aromatherapy. It's not uncommon for a woman to spend an hour at the supermarket in the household goods section, spending time sniffing the scents of washing detergents/fabric softener or soaps; some may not necessarily want to put fragrance on their bodies but would prefer to smell sweet candles, or to relax in a fragrant bath or smell clean clothing. The market for scented home products is really booming. In France, it wouldn't be uncommon to dab a child with a bit of eau de cologne after a bath. It would be nice to grow up with such a familiarity with fragrance. Japan is slowly coming around to the idea of personal fragrance as something separate from home and cleaning products. I think fragrance use will be much more common with, say, my grandchildren's generation.

Marlen Harrison: How did you come to study fragrance and become a perfumer?

Osawa Satori: I liked plants from an early age. When I was a child, I would often carry a plant picture book in my pocket while walking home from school. My mother had a flower arrangement class at home; I watched pupils work with miscellaneous flowers and this contributed to my interest in flowers. And then because flowers were planted seasonally in the garden, I became even more interested.

When I started growing herbs and learning about aromatherapy and using natural flavors as an adult, I became a little more interested in a wide range of fragrance and soon entered into the world of perfume.

I then entered a perfume school in Japan and studied under Kenji Maruyama, an experienced perfumer who served as chief perfumer at Firmenich. While an intern at the company, I slowly began working with made-to-order fragrances in 2000.

Marlen Harrison: What famous fragrances from Japanese or Western (or other) brands were you most drawn to or were perhaps most influential?

Osawa Satori: Although there are so many memorable fragrances it is a little difficult to name just one, I have always been drawn to traditional Japanese aromas of agarwood. And Nina Ricci's Capricci is, for me, special as it was my first perfume, a gift from my father after a business trip. I was so happy to remove the cocoa-colored ribbon from the shiny wrapping paper, my father as excited as I was with this gift, and to discover the beautiful bottle. It was a scent that made an impression on me at 16 and that I loved through to adulthood. It's ironic the name Capricci means fickle, and it's a shame it was discontinued. I loved the aldehyde, rose and jasmine, a classic accord that might be a bit old-fashioned nowadays. I thought it was very feminine, a youthful scent at that time.

Opium is also an impressive fragrance. It is a heavy scent that stands its ground. My older sister-in-law, who is tall and slender with beautiful, long flowing hair, was always wearing Yves Saint Laurent clothes. If I received hand-me-down clothes from her I could still smell the oriental aroma faintly lingering. Opium was the kind of perfume suitable for refined adult women like her. But I think that I felt at that time it was not really suitable for me, a much younger woman.

Marlen Harrison: Osawa-san, do you have a specific or signature accord or note that you work with in many of your fragrances that makes the scent "clearly Satori"?

Osawa Satori: A main feature of my fragrances is that, in a nutshell, they are "dry". And my approach to gourmand perfume is unique in that I'm interested in typical Japanese sweets which include rice and red beans as raw materials married with rich aromas such as butter and cream. For example, Wasanbon:

Earlier, you asked me, "Is there such a thing as a Japanese style of perfumery?" Let me further elaborate: My Oriental approach is comprised of dry wood and spices, and plant-based animalics. For example, my Oribe tea aroma, is also fragrant with the tatami smell. In my Yoru no Ume ("plum blossoms in the night") is the hidden scent of ink painting. Perhaps these aromatic accents will be nostalgiac for anyone who grew up or lived in Japan; to those unfamilair with Japanese culture these accents might be new and unusual.

The scent of agarwood, also known as oud, is the same. Now it's quite popular in fragrances, but the scent of a perfume and the kind of Japanese agarwood we use in Kodo (warming "kubako" or fragrant wood in a "koro" or ceramic cup over charcoal covered in ash) is quite different. On the one hand, oud is heavier, resinous and animalic. It's a sensual smell that can stir passion. On the other hand, agarwood has spicy-woody notes and is dry, warm and sweet; it is a clean scent that can touch the heart. The aroma reminiscent of this traditionally warmed agarwood can be found in many of my perfumes. Like a soft light from a sliding paper door, I thought I would like to express the agarwood aroma indirectly in a perfume. Therefore, in my fragrances this note is dry and subtle.

Marlen Harrison: What fragrance notes or styles have you not yet experimented with but would like to experiment with in the future?

Osawa Satori: The classic fougere is not as popular nowadays and regarded as a bit old-fashioned (in Japan we would say that it is an "ojisan" or uncle smell). In Japan, floral aromas are quite popular, so I think it would be an interesting challenge to combine these two profiles - traditional men's fougere with modern florals.

And microorganisms are fascinating! For example, I think the smell caused by fermentation can be interesting to experiment with: Miso and soy sauce, natto (fermented beans), koji, etc, and other fermented foods such as liquor. I want to try using their characteristic aromas.

Mushrooms such as Matsutake and Maitake offer warm, moist aromas - an unusual odor profile like wood chips, moss and fern; these fungi somehow have a cryptic secret. Of course, flowers and fruit have bright recognizable aromas. But in the shade of  flowers, under the fallen leaves, there is also the action of microorganisms. And I think that these types of aromas could be easily appreciated by either gender.

Osawa Satori: Flowers have been my best friends and constant companions ever since I was young. In childhood, I traveled overseas and these "exotic" experiences were engraved in my heart. Also, because I very much liked reading books, I was able to transport myself to these fantasy worlds. As an adult, I once again became enamored with the land, plants, and flowers.

Also, in the vicinity of the perfume studio there is Shinjuku Gyoen National Garden. There are numerous types of gardens there such as Japanese, English (UK) and French-style gardens. There is also a deciduous forest woodland and all of this is in downtown Tokyo, a place where we can experience vast nature in the middle of a city. I visited there frequently to see the four seasons of flowers, and enjoy their aromas. Spring is a busy and exciting time to visit because flowers bloom everywhere, one after another.

I admire flowers. Not only are they beautiful but they offer a certain charm. For example, they can show hope as the plum tree withstands the harsh winter, and theSakura (cherry blossom) always reminds us of the coming spring.