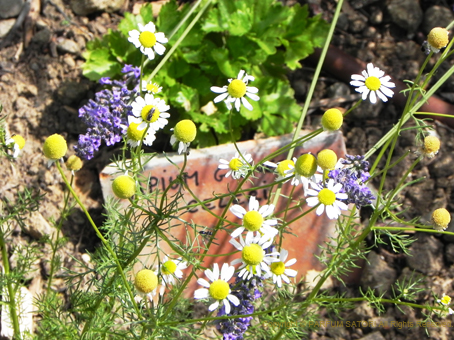 It's Chamomile Blue oil that adds dryness to HANAIRAKU.

HANAHIRAKU has a generous dose of this distinctive smelling Chamomile.

A blend of chamomile and jasmine at high concentrations keeps the balance of the power.

They are small plants of the aster family and produce white flowers.

Azulene is derived the word azur meaning blue and used as a part of words such as 'Cote ｄ'azur'. 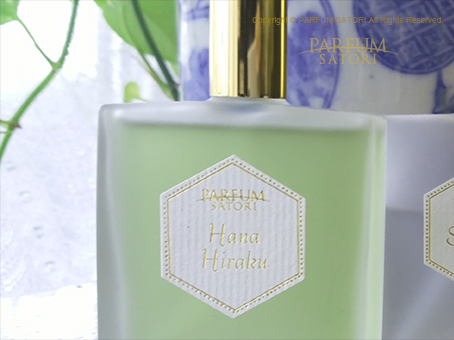 The pale jade green color of HANAHIRAKU was created by mixing blue Chamomile Oil and yellow oil. The perfume on the right looks transparent because it mostly contains white-colored natural essences like iris. 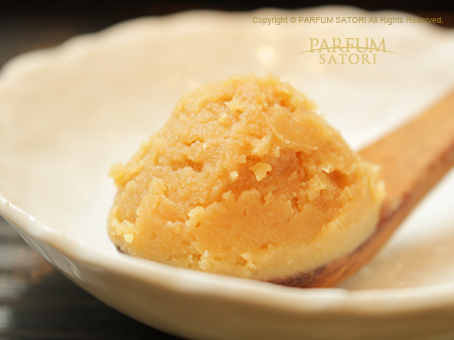 I used to think it smelled like grilled rice crackers (dried soy sauce).

There are notes you can't extract from nature, like scents of miso or soy sauce.

I had been working for a long time to replicate these scents by synthesizing them.

A Chamomile fragrance base I wrote had been in my drawer for years.

Miso, soy sauce, sake, koji. Lately the smell of fermented foods has been attracting attention in the perfume industry. Growing up in Japan, we have been accustomed to these smells. So I want to believe we are best at creating these scents unique to Japan.

A fine fragrance with a drop of this mysterious note. It will be nostalgic to the Japanese but must be new or unusual to those who grew up outside Japan.

This is not an ordinary scent, but at the same time, not too eccentric.

This is a scent perfected as a perfume, smelling pleasantly on your skin.

This is what I want to wear myself.